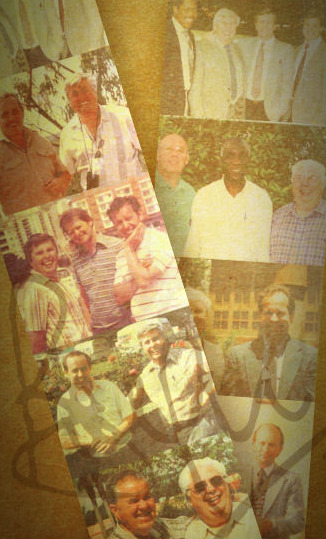 “There are many people who influence our lives and our walk with God over the years. There are however few who impact them, few who revolutionise them. Bryn was such a one to me, also a friend, encourager, inspirer and so much more. Much of what I have and am is a result of the years I was privileged to know, work with and enjoy the fellowship of Bryn Jones. He touched my life and I could never be the same again. I will be forever grateful.”

“I, together with all who have pursued a vision to recover apostolic Christianity, owe Bryn a huge debt. His courage and prophetic urgency stirred hope in our hearts for something better, and motivated us into action. Only the Lord knows how much has been accomplished in recent decades through his initiative and influence.”

“The greatest tribute that we can give to Bryn Jones’ life is found in the word given to him by God. That word of the planting of acorns that would grow into trees ad them become a forest is part of our lives; we are one of those tress. At a time of vision change for us, Bryn planted an acorn of revelation and direction that is still growing in us and around us. He then continued to water that word of direction until it was growing toward maturity. Our life and ministry has become a tree that is affecting not only Kris and I but all those around us. Our lives have been creased forever by his wisdom and fathering. He will be missed but he is forever alive in our hearts and in all that we do.”

“I have never known a man who was as secure in his identity and his commission as Bryn Jones. It enabled him to recognise gifts and callings in others, and to play his part in the development of ministries without in any way being threatened or intimidated by other people’s success. He was inspired in his apostolic ministry by the focus of the apostle Paul ‘to present everyone perfect in Christ.”

“Bryn Jones was an inspiration, a prophet and a friend. My ministry and indeed my life is much the richer because of these three things.”

“Bryn Jones was a man sent and appointed by God to his generation, who was never ashamed of the Gospel and the Kingdom. He left much fruit that will remain for generations to come. To my friend Bryn, I can hear Jesus say, “Well done my good and faithful servant.”

“Bryn was a pioneer in pursuing God’s agenda of restoration in the church and leading in the things of the Holy Spirit. In many ways, he blazes a trail for others to follow. We honour and esteem Bryn as one of the heroes of faith.”

“Through all the years my personal appreciation of Bryn has been of the highest. His generosity of spirit and his depth of faith have always been an inspiration and a blessing. His giftedness is beyond question and his passion for God is a truly excellent thing for all to aspire to. We will all miss this giant of faith in many different ways. It is with gratitude that I recall all of his warmth and help over the years.”

“The contribution that Bryn made in the early stages of the Charismatic movement and the latest development of the New Churches is incalculable. His single minded commitment to raising up radical, apostolic churches is unparalleled in recent times.”

“Bryn Jones was a pioneer. His strong advocacy of house churches, leadership development and his outward focus will serve many people for years to come. Bryn’s legacy goes beyond innovative methods; he brought an enriched understanding of God’s covenant faithfulness and His Kingdom’s reign. I was honoured to call him my friend.”

“Bryn was truly a spiritual father to me. In my experience he was the closest to Paul the apostle that you could get!”

“Bryn, a father amongst fathers, a man who moved the soul of a person towards God. His pursuit of the deeper things of God drew us all to go deeper. Through his love for Christ, he saw beyond the immediate and used all he had to mould the person towards their Christ-centred destiny. A man who transformed me, my family and this generation.”

“If there is one legacy Bryn has left us to aspire to, it is to be men and women of the Spirit. Bryn was a man of the Spirit. In a church age where technology, charisma and advertising can easily present an image of success and anointing, it was refreshing to meet a man whose only confidence was the mercy of God and the leading and presence of the Holy Spirit.”

“Bryn was a man chosen by God in due season who made a considerable impact for the Kingdom of God in his generation. Bryn was a dedicated servant of the Lord whose mission was his life and whose life was his mission. His heart was captivated with a vision of the beauty of Christ, the glory of the church and the reality of the Kingdom now. Such was the passion of his heart that he sought always to strive for excellence in all that he felt called to do. His single focus was the ultimate vision his eyes had seen and he was determined not to settle for anything less than the highest. He could not settle for second best. A powerful preacher, a prophet before his time of no mean standing, and an apostle highly esteemed even by his detractors. He wore his successes with humility and suffered his struggles and failures with a quiet dignity. For my wife and me he shall be cherished as a true brother and a faithful friend.

Thank you Bryn for being a man of God.”

“He was a caring and loving brother. A faithful and true friend. An example in his devotion and passion for the purposes of God and an esteemed servant of the Lord.”

“In the unfolding movement of the Kingdom, God raises up key people whose calling is to establish landmarks along the way. Bryn Jones was one such landmark, whose life and ministry we remember and celebrate. The evangelical family salutes a great pilgrim.”