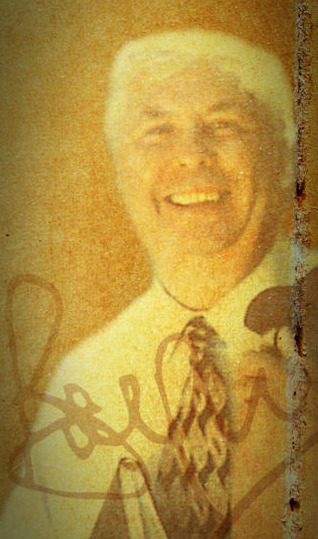 Bryn was born into a coalmining family in the small town of Aberdare, South Wales. From an early age Bryn was to feel strongly the social divide of the working classes struggling against the bosses and middle/upper class. This social divide was represented in religious life by management attending ‘Church’, and the ordinary working class person attending ‘chapel’. This division was to have a major impact on his life.

He regularly attended Sunday school and by the age of 15 was searching for a purpose to his life. After going with a friend to Chapel, he experienced a great longing for God and found himself reading Acts 2:21 in his mother’s Bible, resulting in the realisation he could be ‘saved’. There and then he prayed earnestly, felt a lifting of the heaviness on him, and knew he had been saved.

From that day on he felt his purpose here was to share Christ everywhere – starting in his hometown and then around the world. He did not have the answer as to how, but he knew he had to do it. In 1957 he was baptised with the Holy Spirit in s small Pentecostal church in Aberamam, South Wales. This event changed his perception and understanding of the person and nature of God. Until then, God had been personal, great, good and full of mercy. Subsequently, Bryn saw God additionally as all-powerful, supernatural, with healings and miracles, equipping people with the gifts of the Spirit so that His Kingdom could be advanced worldwide.

He entered the Bible College of Wales in 1958 where he learned a life of prayer, faith and commitment to God. Although the College frowned on spiritual gifts being used in meetings, this did not stop Bryn from moving out in gift in private gatherings. An avid reader, he enjoyed a wide variety if books and was deeply influenced by reading Roland Allen’s book ‘Missionary Methods St. Paul’s or Ours’. Watchman Nee’s book ‘Concerning our Missions’ (re-issued later as ‘Normal Christian Church Life’) was another influence that was to shape his concept of church life. But by far, the biggest influence was a magazine published by Austen Sparks and the Honour Oak Fellowship in London, ‘Witness and Testimony’. In addition, two major conferences also transformed his thinking on the church and kingdom. Now his thoughts on class and God were shaping into questions like, ‘What is the nature of the church?’ and ‘What relevance has God to our time in today’s irrelevant church?’ He was well acquainted with the church’s social division, archaic buildings, obsolete rituals and a Bible no-one understood.

This was the beginning of a lifetime’s mission to restore God’s channel of communication to man’s world in its pure and true form – the timeless word of God to man through His church.

At Bible College he began to think more deeply on the nature and life of the church as seen in the New Testament. He was struck by its simplicity of structure, services and community life, with a dependence on God’s Spirit. He observed a people moving in faith for the supernatural, with God relevant and central to their everyday life, and a commitment to God in daily life, and to their mission to the ends of the earth. This was to against the grain of mainstream church, and in later years there was immense opposition from established denominations, bad publicity in the media and on TV, as well as in the Christian press of the day.

On leaving college in 1961 he went with a colleague to Cornwall, and through a series of supernatural visions they were led to different places and people, finally settling in Newquay, from where the held highly successful evangelistic mission in the region. They begun their first ‘church I the home’ in St. Austell in 1962, and the concept that had begun in college became a reality and was to remain a deeply held conviction for the rest of his life.

In 1964 he married Edna, who had been a student at the Bible College of Wales, and three months after their marriage they joined with Philip and Muriel Mohabir in Guyana – then British Guyana. There they pioneered ‘New testament’ churches, worked as a team, and lived as an extended family in the same home. Throughout their marriage, Edna was a rock to Bryn and often ministered with him in the UK and internationally.

On their return to England Edna was pregnant and they had their first child in March 1967. At this time Bryn was seeing more the need of plurality of ministries in the church, learning to work together according to gift, and a team began to form with such men as his brother Keri Jones, Ivor Hopkins, John Spiller, Goos Vedder and Tony Ling.

As a result of some meetings in Bradford, West Yorkshire, Bryn moved his family there to help two church communities; one a ‘church in the home’, and the other a former fellowship of an outstanding ‘Holiness Pastor’, Walter (Wally) North. These church communities later joined together along with a Brethren church and became know as Church House, Bradford, which was to become widely known. In the early days Bryn took a job as a laundry van driver in order to support his family.

A great friend of his, Arthur Wallis, invited him to join with several other men from around the country to look at developments in the Middle East (Israel’s 7 day war) in the light of biblical prophecy, and these few days together proved to be a turning point in the course of his life and work. During this time the Holy Spirit visited them in a powerful way, emphasising the bonding of them as committed men to a recovery of church life, understanding its nature and function, and the importance of recognising ministry gifts. No longer were there to be isolated ministries, but rather ministries joined together in purpose, and this was to become the hallmark of his ministry for the rest of this life. This was the beginning of a revelation of what it meant to be in covenant, learning covenant privileges and the responsibilities that came with it. His understanding of covenant profoundly affected the way he saw the church function, and also influenced his thinking as to how the Kingdom of God is to be extended, including the dealing with unseen powers.

Thus began what became known as Covenant Ministries International, ministries of Ephesians 4 ministry gifting, joined together in the common vision to see God’s church established and His Kingdom extended. Bryn led this apostolic team and saw the planting and serving of churches throughout the UK, working alongside other ministries in the United States, Zambia, Zimbabwe, South Africa, India, Sri Lanka, Norway, Germany, Switzerland and France.

Following on from this, large conferences developed, most notably the Dales Bible Week, and Wales Bible Week, eventually leading at its peak to an aggregate total of three conferences and 20,000 people. People were drawn from everywhere, and went everywhere with the message they were sharing. Today that message is still as strong – the church in its prophetic role to the nations, and the consequent social dimension to this.

In the late 70’s Bryn moved with his family to St. Louis, Missouri, USA where he spent five years pastoring New Covenant church, before returning to the UK. During this time he wrote the highly successful series of Bible study helps entitles School of the Word, was Editor of Restoration Magazine, which went worldwide, and was the main printed vehicle for the voice of Covenant Ministries. He founded ICLP (the International Christian Leadership Programme), Help International, a humanitarian relief and development agency and The Institute of World Concerns, a research institute for the serious study of world peace through the application of biblical principles. He also found time to write numerous books, the most recent of which was 'The Radical Church'.

Bryn Jones’ life can be summed up as one who was ever in pursuit of God, extending the Kingdom while provoking the church to speak with a prophetic voice, communicating relevance and meaning to today’s people and society. Bryn saw Christ’s church as a community where no class or race barriers exist and which lived in and demonstrated the power of the Holy Spirit.

Edna still lives in the Midlands close to many of their family. Bryn and Edna have four children and many grandchildren.